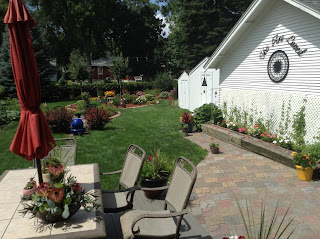 I sit here on the deck, the fan hard at work keeping the flies away, the whirligig spinning in the light northerly breeze, a third of the way into my whodunit, the dinner plate hibiscus proudly displaying three amazing blooms, the beast curled up at the feet of his mistress and the woman I love, having ingested a small glass of wine and a nosh, the sun casting a shadow on the garage proclamation..."You Are Loved," and I know it just as well could read "You Are Blessed!"  We have chosen to spend this, our 44th anniversary, quietly together.  We have spent previous anniversaries in exotic places, exploring new and unusual things or returning to places we love.  Each has been an amazing event.  But somehow, this is right.  The beautiful yellow butterfly.  The busy dragonflies.  Even the youngster who has apparently started band this summer and has learned how to make his trombone make loud and definitive noises stresses the idyllic feeling of the day.  I know that somewhere passed these garden fences, there is turmoil...there is hatred...there is uncertainty.  But today?  For us?  The world is a quiet, a beautiful place...one in which we truly celebrate each other--where we have been, and where we are going--according to the most beautiful song sung at our wedding ceremony:  Together Forever.  It is true.  Blessed!  And the garage is right!

Music to my ears

"They" say, music soothes the savage breast.  Miss Lucy used to judge the tenor of our mood by how we played the piano.  The harder we struck the keys, the farther from the piano she went.  Eventually, "they" became right--the physicality of actually beating the piano keys had a calming effect on us as we played.  Aggression was often replaced with the simple pleasure of making the instrument yield to our desires.  Now don't get me wrong.  After 9 years of lessons, I'm still lucky I can play from the John Thompson third grade book...but thank god for those 9 years.
Miss Lucy is gone.  I understand "they" are still around.
During the first years of our marriage, we bought a Yamaha (the piano, not the motorcycle).  And let me tell you, while there have been times I have "ridden" that instrument, during the last few months it's been ridden hard!  Injustice irks me.  Play.  Bullies irk me.  Play.  Lying irks me.  Play.  Lying about lying really ticks me off.  Pound.  Pound.  Pound.
A good friend of ours recently donated to our musical library--Reader's Digest song books--tunes with which I am familiar--old hymns, songs of the 50's and 60's, The Beer Barrel Polka and Puff the Magic Dragon.  Nothing gives me more pleasure than to sit at the piano and hit about 85 % of the notes correctly.  Hot stuff!  Sometimes, if they are in my 6 note range, I even sing along.  You would be stirred by my three verse rendition of "The Battle Hymn of the Republic."  But I digress.
Let me give you an example.  I watched the World News Tonight (for me, usually a HUGE mistake).  The president's lawyer lied.  And then lied about lying.  Mr. Trump did write Trump Jr.'s response to the question of meeting with the Russians.  And I pounded out a chorus of "Call Me Irresponsible."  The North Koreans could easily have killed passengers on a plane with their latest ICBM missile test, and it was "Ring of Fire."   Two sheriff's deputies were repeatedly shot, and it was "What the World Needs Now."  Thankfully, by song three, I could begin to actually play rather than pound.  "Brighten the Corner Where You Are" made me smile a little.  "America the Beautiful" reminded me of the incalculable good that still exists in this country, and you would have stood up for "God Bless America!"  "When Day is Done", I believe that there is goodness and truth in the world.  I believe that in the end, it will win.  I believe "We Shall Overcome!"  I just hope the piano survives!
Posted by Unknown at 7:00 PM No comments: